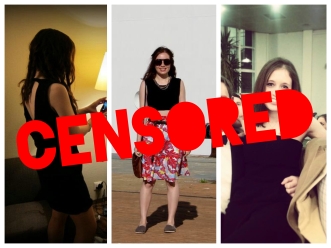 This blog post starts with a playsuit, this playsuit to be exact, worn in a hot and sweaty dance bar on a hot and sweaty night out in Jerusalem last week. The kind of night out where diplomats, journalists and busy professionals go to forget the bomb that killed dozens at the bar up the street ten years ago, or the stabbing at a checkpoint last week or the war that is taking place beyond the Syrian border 3 hours drive north where they’ll be heading to report in a few days time.

These nights, snatches of normality and tequila fuelled moves last seen at a year 7 disco, are sacred. And so, amidst the awkward shuffles of western journalists trying to dance in the desert gear they packed when they thought this city-that-is-sometimes-a-warzone-but-mostly-a-normal-place was the dusty wasteland the 3 minute TV clip makes out, we danced the night away.

The next morning, over breakfast and strong coffee, a friend of a friend asked me a question. “Are there any rules?” she asked, “like, is there a code you have to follow?”. Not exactly the clearest question, and so she clarified. “I guess what I’m saying is that I look to my religious leaders for spiritual guidance, and I’d find it hard to follow a religious leader who didn’t conduct themselves in a moral way”. Ok, interest piqued. I had no idea what she meant, and so I asked her, and she replied. “What I’m really saying is how can you be a Rabbi and wear a playsuit”.

Ah, so we’re having THAT conversation…

I’ve been focused recently on the construction of online identity and the question of how much identity in online spheres can be read as performance. In doing so I’ve become increasingly aware of the other kinds of performance present in social interaction, and particularly where we present a curated or modified self to others.

The most pervasive and fascinating (for me anyway…) example of this, partly because it straddles the online and offline worlds, is that of fashion and beauty.  And so back to the playsuit. My friend’s friend (I’m not sure her and I are ever going to be friends) was saying a few interesting and I think quite important things:

a.) People make inferences about your values from the way that you dress- In this case the most obvious assumption being made was that I don’t observe (or indeed care for) Judaism’s laws around modesty. And she’d happen to be right-ish. The TL-DR version is basically that women’s bodies are a provocation to men and it is women’s responsibility to cover up so as not to tempt men into sin. I don’t value the part of my tradition which objectifies women- either by saying bodies are a provocation when on display or demanding that they are covered- but that doesn’t mean I don’t value Jewish tradition. For this particular individual, the two are indivisible, but for me the distinction is essential. I see modesty as a question of discretion, but read it as something that is much more to do with behaviour, ‘flashiness’ and what we seek attention for from others than a question of covering enough of our arms or legs. Despite this, it leaves me with a question about how someone reads unexplained public behaviour and what responsibility I have as a leader to account for my actions.

b.) Women in public roles are sexualised, and the onus is often on them to moderate that- It’s not just Jewish tradition that constructs female sexuality as a power that needs to be restrained or managed in the public sphere. Our society is full of examples- women don’t walk, they ‘parade their frames’, newsreaders, ‘flash their legs‘ when wearing short skirts, it’s everywhere (yes, even beyond the mail, it was just an easy target…). Column inches about female politicians are filled with discussions about their hair, shoes, and wardrobe makeovers. Women’s appearance is a public issue and female bodies are public property ripe for discussion and criticism, thus women are told to ‘cover up‘ and manage the public’s response to their bodies. I know that stepping onto the bimah (Jewish version of a pulpit) puts me into this category, and have heard horror stories from female colleagues about the kind of comments that congregants make about their appearance. Observing the internet storm around Rev. Sally Hitchiner’s fashion choices a few years ago (here and here) raised interesting questions about whether the public are able to handle the confluence of fashionable dressing and clerical status. I guess this was my first taste of a much longer conversation ahead…

c.) Private acts (such as wearing a bikini) are often compromised by the eternal presence of cameras and social media- We all (clergy or otherwise) have to be much more careful about what ends up online because there are cameras everywhere. I think this is far more complicated than worrying about a bikini picture ending up online, because its really a conversation about what is deemed wrong or inappropriate about that. Is it the picture itself? Is it what the picture shows? Or is it the forum it is displayed in? I think the answer is probably that the problem arises from the question addressed above, the implicit sexualisation and objectification of women’s bodies which is what makes a photo like that ‘inappropriate’. This means I don’t have a principled problem with this kind of picture being online, I think we ought to trust people to be able to cope with the idea of seeing someone in a swimsuit and not reducing them to that image in the rest of their lives, but also would never allow one to be on the internet, because I don’t trust people to do that.

d.) It’s possible to know something is wrong and still be required or choose to go along with it– The bit I’ve figured out the least, because in spite of my quite strong views around the problems with modesty laws, I do often dress modestly out of choice. I love fashion, but also recognise that it suffers from the complex challenges that any predominantly female act of expression faces when it is constructed within a patriarchal society. These challenges include questions about who someone is dressing for, how much (and what kind of) value is placed on aesthetics, how dress is used as a symbol of money and power and how sexuality is express and/or policed. It’s because of this that outside of dingy, hot, sweaty Jerusalem night clubs full of other people with similar professional considerations, I do dress modestly and am judicious about what my curated self (and I would say buying and dressing in fashionable clothing is a kind of curation) is saying to the world.